Came across a little brochure at the visitor centre here in Cambridge Bay, entitled "Safety in Polar Bear Country." I thnk this was applicable to the ATV adventure last week. Nice to know we came out of it unscathed, having neither read the brochure, nor seen the alleged bears. 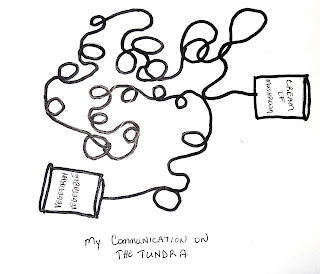 1. STAY CALM and call for help by radio or satellite phone. (Get contact numbers at your orientation to the park.). Right. Still looking for the little hut where the park ranger sits to orientate us. Found the outhouse. Maybe he fell in. Say what? Oh, there is no little hut with a park ranger. But the out house was real. Stinky, too. Um, radio? Satellite phone? You are joking, aren't you? And while we are at it, let's look at the calm for a moment. The bear might be well over a thousand pounds. I'm 120. QUIT LAUGHING, it might anger the bear (and me). When he stands on his hind legs, he's about 34 feet tall. I'm 5'7" ish. I think the only calm one will be the bear as he will know where his next meal is coming from.
2. Report location and time of incident. So now that I am standing in front of the calm bear, I have to report on my non-existent satellite phone or my non existent radio (my choice of which) where I am (on a rock in the middle of no where, about 45 minutes away from somewhere), and the time of the incident  (Meal time. For the bear.). 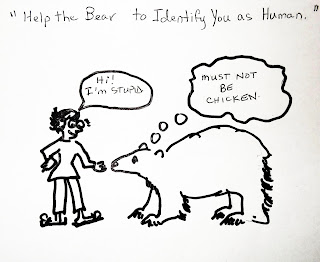 3. Report the number of people involved. No one. He hasn't eaten anyone yet. Maybe the calm bear can count how many of us there are. Breakfast. Lunch. Dinner. Midnight Buffet.
4. Report extent of injuries and property damage. Assuming the bear is still calm, then mainly I will need new underwear and yoga pants. Ditto for the other members of the now party-less party.
5. Check that all people in the group are accounted for. Huh? Where's Dinner?
6. Report numbers and last locations of all polar bears involved in the incident. There's more than one? I can't see beyond the 40 ft. tall one standing, calmly, 6 feet in front of me. Maybe they're hiding behind him. Calmly as well, I hope. 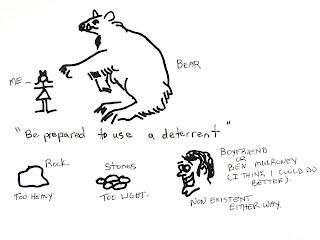 7. Report reason for the attack if known. (Female protecting cubs, surprise, defending food source, etc.). They don't specify who is surprised. The bear is remaining calm, but he might be a wee bit surprised because the food source is right in front of him. The food source is a tad unhappy at this point, and since I can't see behind the 45 ft. tall standing bear, I don't know if he is defending cubs. Which would make him a her if he was. Is.
8. Report description of bears (male or female, size, markings, etc.). Got this one. No gender bias. Big. White. Black eyes, black nose. Hungry. But calm. 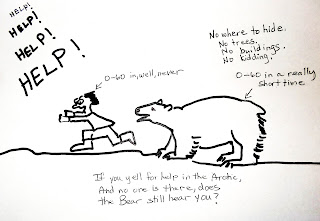 9. Stand by to provide additional information to rescuers. Stand. By. Yes. I have information for you. Missing Breakfast. Lost Lunch. Almost done like Dinner. GET ME OUTTA HERE NOW!
Posted by nursenurse at 7:19 PM No comments: Links to this post

Saturday's antics. Grandma is not a wallflower.


Posted by nursenurse at 1:04 AM 2 comments: Links to this post 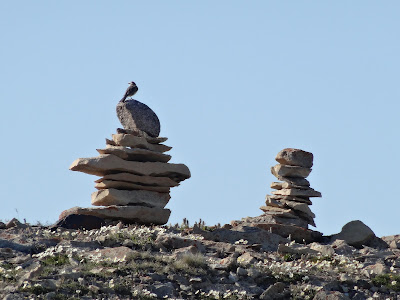 I looked after a young man about my daughter's age the other day. It took a few minutes to realize he was deaf. He rang the doorbell at the clinic, I thought he saw me coming to the door, but he walked away before I could get there. I opened the door and called out, but he scurried away. I figured he was looking for a specific nurse, and when he saw I wasn't the one, he left. He returned a few minutes later being rerouted by our xray tech at the residence (he had knocked at the residence door) and I let him in. We had the most stilted non-conversation of grunts and groans I have ever had. I gathered he had been in a fight and hit in the jaw. Finally, once in the ER, I could only find a pad of Post It notes, fortunately the size above the little one inch square ones, and it was on them that the whole visit was charted, once I asked him in writing if he was hard of hearing. We wrote back and forth until I had a nice little pile of about 25 Post It notes. In the end I felt his injuries were not serious, and sent him off with some ibuprofen and instructions to return in the AM for the doctor to take a look at him. In return, I received a handshake, a smile, and two thumbs up. And then the nicest of hugs before he disappeared into the day. And that is why I love my job.
Posted by nursenurse at 1:52 AM No comments: Links to this post 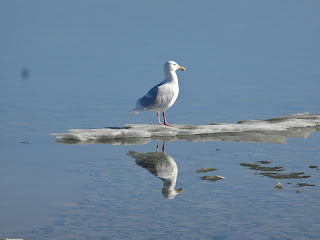 What a lovely evening I was going to have last night! Purchased my modem in the afternoon. In anticipation of a night with Facebook, I went for a walk straight after work. I was gone for almost two hours. What was frozen only a short week ago has melted, for the most part, and now portions of the tundra are alive with wild flowers and short grasses. Oh yeah, and mosquitoes and blackflies and no-see-ums. A couple of evenings ago, I decided to walk "off road," through the golf course, to avoid the plumes of dust riled up  by passing ATVs and trucks. There were a few bugs, but they weren't bad. Then  decided I had to play with the macro on my camera and snap a few pictures of the tiny wildflowers that painted the normally barren landscape, so I stepped onto the tundra from the dirt road. NEVER do that, folks. It is an open seating dinner invitation to every six legged creature with wings. Even if you sport bug repellent as I did, you can imagine there are many hardy, hungry creatures out there determined to harvest your blood. It's not like there is much for them to chose from out there. Still haven't seen a musk ox. Except for the stuffed one in the airport. Maybe he stepped on the wrong piece of tundra too. 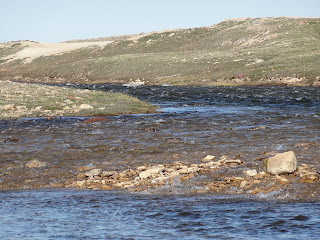 Last night's meander took me on the road towards Mt. Pelly, a rocky (what else?) land formation about 15K from here. I went as far as the bridge a kilometer from town as the crow flies, closer to two because of all the dipsy doodles and curves in the road. The river that had been iced over was now flowing freely. I turned onto a small road beside the bridge, and found remnants of camps, and sand spits that contained a chair or two for the fishermen that would soon troll the shores for the summer bounty of fish. The water looks shallow, but is beautifully clear. I stuck a hand into it, and sure enough it was icy cold. On the way home I spied 3 children on the banks further down toward the river, in their skivvies, jumping in and out of that river, laughing and giggling and having a grand old time chasing each other on the sand. The air temp is hovering around 20C, which is unseasonably warm for this time of year. Actually for anytime of the year, here, that is. 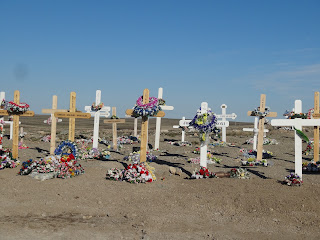 I walked into one of the town cemeteries that lays on a rocky ridge. I like cemeteries. They all have so many stories to tell, and they leave much to the imagination. Here, the graves are marked by wooden crosses, some painted white, others in natural wood. Some are small in stature, others are a commanding presence. Some marked with fading paint with the names and the dates of death. More recent ones have engraved plaques that leave you wondering, why so young? Why so old? Some graves are encircled by rocks, some painted, some not. Many are completely covered with artificial flowers and wreaths, the odd stuffed Snoopy or a baseball cap implanted. Most look well tended, but as with any graveyard, there are those that seem neglected, the fake posies having faded from many years in the sun, the painted names no longer readable. As I said a few silent prayers for all the souls interred in the rock, I wondered who will pray for me when I have been gone a while, will anyone ever look at my grave and wonder who I was, who my family was, and wonder how I mattered in life? Will a prayer ever be said by a stranger, wondering what stories lie within?
The walk ended on a high note, with me skipping away, I even ran a few paces in spite of my sore heel. I was going to cook dinner, and entrench myself in my apartment with my soon to be hooked up internet. Facebook! Yahoo! The ability to pay bills on my own computer! And.....nothing. The newly purchased modem didn't work. I think the graveyard residents could hear the f-sharps echoing across the land. And so I was forced into another night of DejaView TV. As you can tell, I have remedied the situation quite nicely.
I work with a lot of younger nurses up here, at least younger by my standards, and I have to wonder when my neck became attached to my chin? Really? I have been heavier than I am now, and I used to have a jawline then. Now it seems the turkey wattles are forming. And we are not amused.
The parade of craftsmen has started here, checking out the new nurse to see what she will buy. Well, she told one entrepreneur on the street that she wanted the ring carved from musk ox horn, but he had to come by the clinic during regular business hours when she would be sure to have the cash to pay for it. Guess he slept in or something. Geez, I tried to wear a part of a musk ox, and couldn't. I think, however, there are plenty of 2-legged ones roaming the streets on the weekends.
It is just after midnight as I write (type, compose, whatever), and I can see that the sun is looking like it wants to set. I am craving darkness and an open window. Well, I have the open window, but it is blocked by a supposed  black out blind (ha!), some sheer drapes, two quilts and assorted push pins. And a chair. The light shines through still. I checked on the internet, and the sun will set for the first time since May on July 23rd. For an hour or so, in the middle of what the rest of the world would call "night." If I had champagne, I would drink a toast!
And that is my world for the moment.
Salud!

Posted by nursenurse at 4:02 AM 2 comments: Links to this post