Fall is almost over, and as I sit here in the GWN, I have made a few observations:

1. Why the hell did I zip line 18 towers? The first nine would have been plenty. I was honestly going to chicken out on the second set, once I got to the top of the first of the second nine towers. But I didn't. And I was okay, until the 6th or 7th tower, the tallest one. That one, you fling yourself from the edge of the building, no platform, nothing. And as my heart was pounding and my thoughts were racing, I had to tell myself that I had already completed thirteen of these towers, suspended by a harness and a wedgie, and survived. Well, I'm still here.

2. I will say the same about parasailing, but at least I had a couple of margaritas on board once again.

3. Kayaking in an underground cavern complete with stalactites and stalagmites with more than two other kayaks is just not worth your while. They talk about preserving these structures and that it is forbidden to hit them, but really? Most folks down there are neophytes, and what took the earth thousands or millions of years to produce is being destroyed, slowly, but surely.

4. The best German food is in Playa del Carmen. Trust me on that one.

5. Someone in Guatemala thought my Spanish had really improved, actually said it was good. Too much Ron Zacapa, methinks.

6. There is a list of the ten worst airports in North America, Bloomberg Businessweek. No small surprise I have been in 7 of them. I must be doing something really wrong.

7. Even less of a surprise is that Miami airport was on that list. And that my luggage decided to overnight there. Again.

8. Disneyworld is for grown ups. Forget the kids. Really

Meanwhile, in the North:

a) Readying a northern patient for an ECG is like peeling an onion. You roll up the snow pants. Then the stretchy pants. Or the blue jeans if they are male. Next you roll down a pair of wool socks. Another pair of wool socks. Then the long johns go up, followed by the usually too tight leggings. You might see skin now. Never mind the upper body layers. Jacket, vest, sweatshirt, button shirt, t-shirt, thermal shirt, wife beater. Maybe a bra. And here I am, in minus 30C weather, running between buildings in my greens. With a bra. Just thought you would want to know.

b) I was looking for the thermometer tonight. "Why can't you use that one?" asks the Mom as her child puts the probe of the rectal thermometer in his mouth.

And that is my wee world for now.

A Bit of Everything

1. Who Needs Sleeping Pills? Any grandparent who has ever run after young grandkids certainly do not. I was in bed every night 5 minutes after the two were tucked cosily into their beds. My alarm clock was the goofy goldie breathing heavily in my face at HER breakfast time.

2. Don't You Know..... That a) it isn't "my job to eat corn." Said the Humvee when I tried to sneak some corn in the funky mac and cheese I made. The Kumquat didn't think it was her job either, but she unceremoniously picked out each kernel and heaped them at the side of her plate. The Humvee made a trip to the garbage can, with each individual kernel of corn. And you know how many kernels are in a big can of Green Giant Niblets, right...?

3. Grandma Does Not Know How to Dress. Kids, maybe almost four year old little boys, to be exact. The great sock toe box is one example. If the pinkie toe is not included in the coloured toebox, well, "You're just doing it wrong, Grandma!" Apparently my Mom never learned me.

4. I Am Strong, I Am Invincible, I Am Grandma! As I tore through the end of the Reptilia exhibit and the Gift Shop, melting down almost four year old footballed under one arm, while wielding the jogging stroller with the Little One with the the other arm, through the crowds and out the door. It stopped when I couldn't fold the stroller down properly. Curses! Foiled again! But that's what SUVs are for.

And in the GWN (Great White North):

5. Fish hooks and fingers do not mix.

6. Neither do fish hooks and noses.

7. You would think that a nursing station, any nursing station, in the wilds of Northern Canada, would sport decent fish hook cutting implements, like a really decent set of wire cutters, or something like that. Since, you know, they fish up here. All. Year. Around. Ask the guys with the hooks in the finger and the nose. Apparently they don't have them either. Because hooks are meant for fish and not people.

8. DNR does not mean "Do Not Resuscitate" when emblazoned on the roof of an out building. Although some buildings look like they need it. It means "Department of Natural Resources." In case you were wondering.

9. GluStitch. The Krazy Glue of the medical world. Still holding my stethoscope together after 3 years. Imagine what it does for cuts.

10. How long does it take to fix water pipes? Apparently a very long time. And the workers come out at night, kind of like skunks. The water has been off most nights, without warning, and sometimes during the day, with and without warning. I think someone is just messing with our minds and playing with the switch. Would like to rap  some knuckles. Just saying.

11. Today I flew into my next assignment, in a true puddle jumper. A float plane, big enough for four, but carrying the pilot and myself. And as we glided over the Canadian north,  the magic reminded me that I am the most blessed and luckiest girl in the world.

And that is my little world for now. Love to all.

Posted by nursenurse at 4:03 PM No comments:

1. Chicken: For breakfast. For lunch. For dinner. Growing feathers out me arse and now have a strange desire to peck at things on the ground.

2. Margaritas: Fix everything, except for number 1 above. I think they doubled my body's chicken capacity and act as the Miracle Grow for the tail feathers.

3. Holy Chauffeur: The song "Nearer My God to Thee" is welded into my brain. I am sure the Reverend must be moonlighting over there. The Holy School of Speeding  Honking  Lead Footing Driving with the Last Rites in Mind  Where's the Fire  Last Confession on Wheels  One Step Closer to Heaven Unless You Are Doomed to Hell  Not Your Ordinary Sunday Drive  Offensive  Defensive Driving. No wonder we like to pray the rosary on the road. 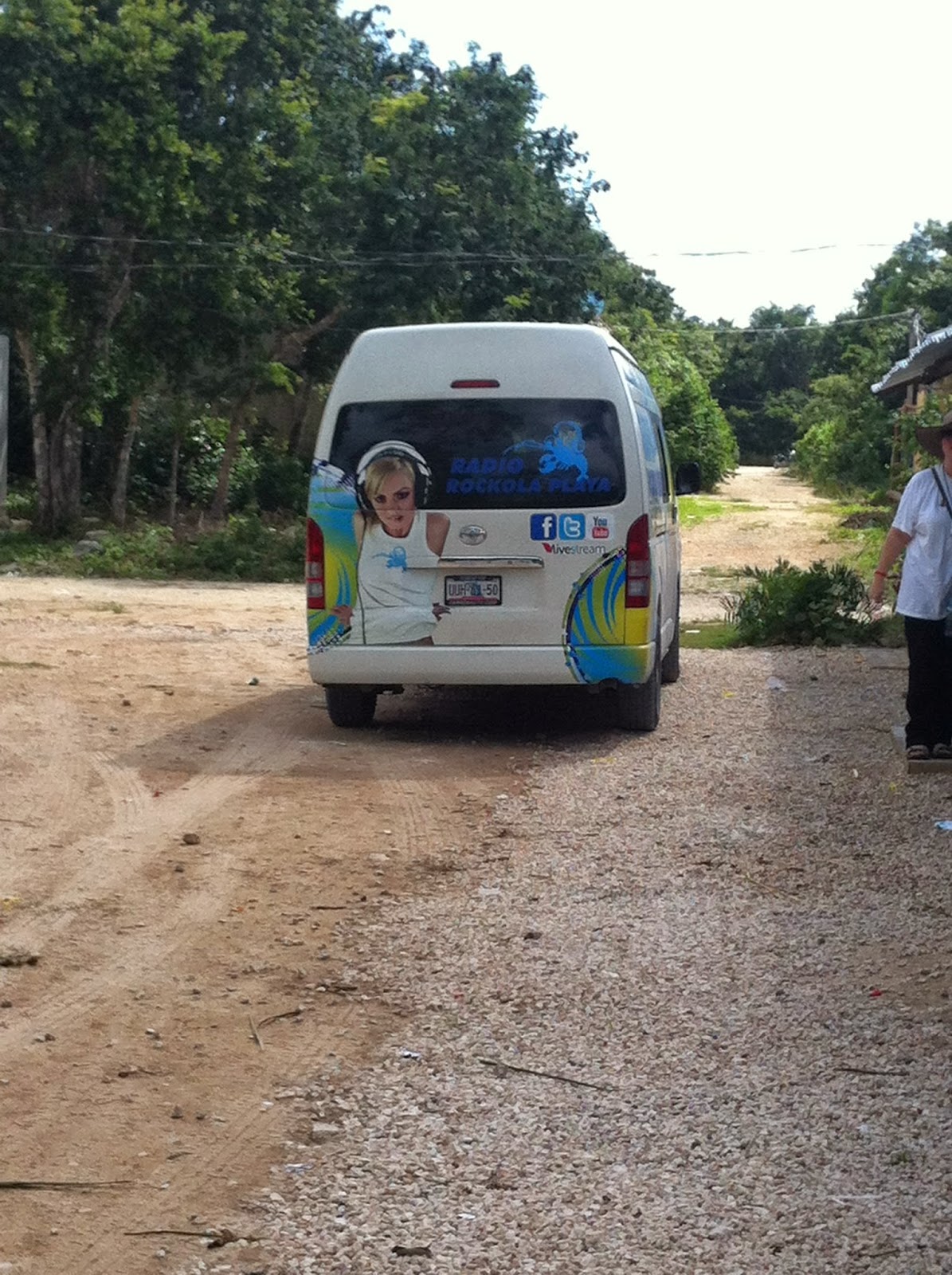 The Horn on The Van

You get the idea.

4. I Can See Clearly Now: After a beer in the park. My second day as Director of Logistics saw a rather huge turnout. And things not set up as I would have wanted, so I had to make do. Made a few small changes throughout the day. We saw (drum roll, please) over 800 patients officially, a squidge over 900 unofficially with those that slipped by our triage. Somewhere during the day, when I realized the multitude that was there, I slipped over to the convenience store and bought a cerveza, to be enjoyed by me, all by myself, in the park across from where the clinic was being held. When I returned, I and the Fastest and Best Translator (Margarita, the translator, not the drink!!!!!!) cleared out 135 or so of those patients in a couple of hours. We all worked hard. And the Logistics Director/Bartender said "Let there be cervezas for all!" Because some days, teetotaling just doesn't cut it. And God saw that it was muy bien. Dos Equis, in fact.


5. Unloveable: Imagine as a Mom with a brand new baby being told to leave your baby in a corner. That she will never be anything. That she will never learn. To not even bother to breast feed your own baby, in a culture where it is practiced very openly. Imagine being told for the first time since your baby's birth four months ago, that our baby has Down's syndrome, by a bunch of foreigners. And that your baby at this moment is so ill that she may die. Imagine a priest praying over your baby, hoping she will make it to the hospital while she is struggling for breath. Imagine being told that your baby is someone, is a soul, that with hard work and perseverance can learn. If only she survives this crisis.

Imagine the 34 year old young man who slipped in the shower 8 years ago, who became partially paralyzed. Imagine his Mom, still so young herself, trying to hold down a job, and trying to take care of his every need. Imagine feet so twisted, limbs so deformed, that it brought tears to the eyes of the foreign medical personnel elected to visit him in home. Imagine the hopelessness, the anger, the resentment he feels, the pain he has endured so much that he has likely refused activities that would have kept him mobile, his limbs straight.

These are the realities we as medical missionaries face. And it is why I, and many others like me, do what we do.

With thanks to Medical Mission Network for the pictures from Jose Maria Morelos.

Posted by nursenurse at 6:29 PM No comments: