By now, you will have figured out that you can't click on the cruise video in the previous installment, because THERE WAS NO CRUISE. At least not much of one to speak of.
It all started out well enough. After weeks of planning, hives and other assorted things, the girls met at the airport and wound our way to beautiful Puerto Rico, to board our 115,000 ton or so ship, the "Caribbean Princess." I must say, from the outside, she is magnificent. I have never been on such a large liner in my life. One of 3200 heads of cattle passengers ponying up to the feed trough buffet most mornings for a bale of hay delightful repast of eggs covered with congealed hollandaise benedict, and every other sort of egg imaginable. Waddling Rolling Wheel barrowing Sashaying ever so nimbly between other bloated porky
fat fellow cruisers who were eating more like Elephants Draught horses They had never seen food before they were feeling at home on this soon to be broken down tub resplendent floating hotel.
Once aboard, we were shown to our postage stamp broom closets cozy staterooms, where we proceeded to throw our belongings about unpack, and check things out. Like the shower with the handle grab bar, in case we hit a rock and tipped over rough waters while cleaning up or just wanted to get kinky. It too wasn't big enough for my fat arse, or anyone else's huge, but if you didn't mind spraying more water than Niagara Falls all over the place mopping up a bit afterwards, it was  woefully inadequate adequate.
We set sail at 2300 Sunday evening, we were to awaken to the island of St. Maarten right outside our scuttle worthy  ship. Instead we awoke to that bloody awful ship's noise that announces whatever disaster is awaiting you  the captain announcing that we wouldn't be arriving to St. Maarten until July 14, 2013 later on that afternoon. The port propeller was shot to hell  not functioning properly. We would have technicians aboard that afternoon to tell us why the propeller was shot to hell   not functioning properly and that  we would be on the cruise to no where  when repairs could be ineffectively effectively carried out. By the time we girls whirled around the island on our Segway tour moving much faster than the boat, it had been decided that the first set of technicians was incompetent more assessing was needed, so another set of people who didn't know what they were doing  technicians was needed. So we spent the next day in St. Lucia  St. Maarten. By Tuesday evening we knew that we were screwed returning to Grenada  Puerto Rico the following day for more useless drivel assessing by folks who didn't have a clue as to how to fix the damned boat would be able to possibly have us on our way. By mid Wednesday, it was all over except for the raping and pillaging, we would be fighting with other cruise liners for excursions moored in San Juan with the offer of a cruise refund and a spit diddly squat WTF  whopping  useless insignificant piss poor generous 25% off our next Princess cruise to be taken not when the hell we would like it by the end of next week  of next year.
By our second day in San Juan, Princess had finally shown some balls and arranged our shuttle into Old San Juan thoughtfully provided us with transport to the City. A list of about 2  available excursions came through so we could plan our escape  days off the ship. We hired taxis and even rented a car one day since the excursions were woefully inadequate not quite what we wanted to do, especially when we wanted to be in Bonaire, anywhere but here  somewhat active. But we had a great time in spite of Princess and the debilitated barge all the unfortunate circumstances. Had we not had 1st class flight tickets on the way home, we would have been screwed again missed our flights as Princess had the same useless techs working on the disembarkation process neglected to give the disembarkation list to the Customs folks, who only had the cast of Two and a Half Men- 4 people to prod the cattle clear all of us. We didn't take the pre arranged livestock transport shuttle back to the airport as we would have become murderers  arrived in the next millenium  too late to check in. Fortunately for 1st class, we were able to avoid the long pointed horns of the crushing herds  economy class line and we sailed through just in time for our flight.
Which left Air Canada and the almost 4 hour delay to our flight from Newark to Toronto, on top of the 3 hour layover. This was because the stupid pilots called in sick and Air Canada sucks  there was no one who could fly the plane  crew available. Three of us managed to get on the earlier flight, and poor, poor Eunice, because they were woefully inadequate could not find her luggage even though we had already been there for 2 hours, had to count nose hairs  eat airport slop  count Hare Krishna amuse herself until a pilot had the decency to show up for work crew could be bribed into working  found. 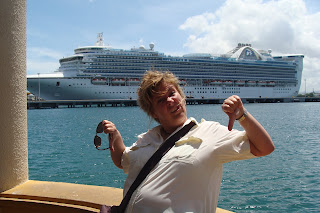 And that was the week that was.
Posted by nursenurse at 9:54 PM 2 comments:

The Princess Diary in Pictures.


"The Love Boat,
Soon will be making another run..."
Ah yes, the memories I want to share with you of our Southern Caribbean cruise, Aboard the lovely Caribbean Princess.

Twas the night before cruising,
And all through the house, lingered incense a burning,
To stifle a mouse.
The chewable vitamins, all taken with care,
To banish the flu, which no one could bear.
The eyes started flaming, all red, full of tears,
The skin started itching, 'til welts did appear.
Aw, chuck it. So I started having trouble breathing, and wouldn't you know it - ended up in the hospital, itchy, teary and breathless, with a slightly low for me blood pressure. The doc gave me  prednisone, told me I wasn't too bad, they were going to keep me an hour until the welts subsided and then send me home. While sitting in the corral with the other poor patients, I started to feel funny. Instead of crying the universal distress call (NURSE!!), in an attempt to not bother anyone much, I stood up, walked to the nurse's desk, and told her "Excuse me, I think I am going to pass out." Something every good nurse like me would do. Out came the wheelchair and the BP cuff, and with a pressure of 72/41 or something similarly in the boots, I was placed in a lovely vinyl recliner, tilted feet up, and plugged with liquid. Unfortunately, it was normal saline and not beer.  After a couple of hours, my pressure was up, the breathing was better, the spots subsiding. Now all I had to do was go home and pack for the cruise. Which meant less than 2  hours of sleep. Not sure if it was the incense my girlfriend's sister was burning in the house, or the two Sunkist chewable vitamin C tablets with natural strawberry flavour and carmine red colouring that caused the reaction. It was the start of an eventful cruise. Sort of.
Cheers!
Posted by nursenurse at 12:25 AM 3 comments:

Today, I went shopping. Two hundred and twenty eight dollars plus change, and four bras later, I am now privy to Victoria's Secret. Apparently Victoria thinks DDs need a push up bra that will catapult them into Fs and Gs. To this I say, why? I tried one on, lovely salmon coloured thing, didn't just make me look perky, or voluptuous. I think projectile might be more the word. Because my thus contained girls would fire through that door long before my arms could reach to push it open, and annihilate everyone and everything in their path.
After many, many bras that lifted and separated everything into lethal weapons, I finally hit upon the perfect bra. The one with memory foam. Which suits me fine because the girls no longer remember which way is up. Now they have help.
And that was my day. Wait for it... ta ta for now!

As I prepare for a Southern Caribbean cruise this Sunday, I make note of a few things.
A) You simply cannot lose 30 pounds in 1 week through diet and exercise alone.
B) Cellulite affects tummy flab. We're talking grapefruit peel here. No more two piece bathing suits. Actually, never did wear them. Flipper is eternally grateful.
C) I once read with horror how Demi Moore had plastic surgery because her knees were sagging. Her knees!!!! As I look south, no longer is it just my boobs heading for my toes. I now have one saggy knee. The left one. And apparently the cellulite from the tummy has taken on the personality of a glacier, creeping into my upper thighs. I think I need to keep my head up.
D) When is a size 10 not a size 10? I'm not talking dress size. Went to Marshall's,  my lord, what an assortment of shoes they have. I need a pair of flats for the cruise. I picked up a nice comfy pair to try on in my most Cinderella fashion, and found out I am the ugly step sister. A size 10 M/W would not fit no matter how I tried to stuff my foot in that shoe. I think there may be foot cellulite there too, although it is too far away for me to see. I wonder if they make Spanx for feet?
And that is my little world at the moment.
Salud!
Posted by nursenurse at 11:26 AM No comments: