Just a wee bit of mish mash from last week's activities.
My life in the past four years has consisted of a lot of firsts: first time really living on my own, first time travelling on my own (to a foreign country where  I don't speak the language, no less), whale watching, piranha fishing, zip lining, well, you get the drift. Nothing is too outlandish, but for this former scaredy cat, it's all bonus.
So last week, my buddy Elaine and I participated in the Cambridge Bay Polar Bear Dip, to raise money for the community centre. Now how many of your friends/acquaintances have been to the Arctic, besides me of course? None, for most of you. And how many of those crazy  adventurous friends have ever swam (swum?) in the Arctic Ocean? In the Northwest Passage, at least close to it? Even less. And since I still haven't seen a live polar bear in the wild, or the ocean, the least I could do was act like one. You know, live in its paws.
So, on a blistering 15 degree C day along with a handful of other oxygen deprived intrepid fund raisers, Elaine and I tested our collective mettle and took the plunge.
Now I know why Arctic char fight so hard. They don't give a flying fig about the hook in their mouths, or the fact that this is their last day before landing on the Corelle.They are just trying to keep warm. And while polar bears, real ones, exude a certain grace while in the ocean depths, I doubt that the first word out of their mouths when they hit the ocean is along the lines of an f-sharp. Neither do they fall flat on their arses when turning around in 3 feet of water  trying to run back to shore. Neither are their arms frozen in their shoulder sockets, lips turning blue (their lips are black, if you want to know), nor does their skin turn red and then blue. And they certainly do not muss their carefully coiffed and lovingly lacquered hair. Clearly, I am not a polar bear. And while this was not necessarily on the bucket list, I'm striking it off anyways. Not. Happening. Again. Ever.
Anyone remember the DEW line? It was a joint venture with the States and Greenland et al to protect us, more like U.S., from the Russkies back in the days of the Cold War, when there were only 2 nuclear crazies in the world. Russia and the States. Nowadays, we have 15 or 16 nuclear crazies out there. Well, hot damn, we were invited out there for brunch. Picked up at the residence, and chauffeured there and back. Eggs cooked to order, bacon, sausage, fried baloney for the easterners, coffee, and SHOPPING! What more could two Ontario girls ask for?
Beer. Okay, got that last night. I'm a happy camper, and still the luckiest girl around. 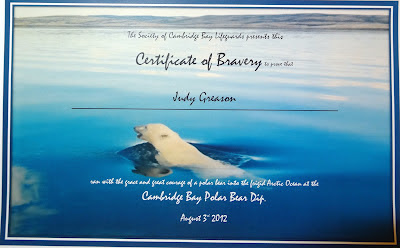