1. Smugglers Take Note. One wonders how all the drugs make their way from Columbia through Central America to the North. I'll tell you how. Pretty simple. They take the bus. And maybe even a taxi. On the way to Belize from Mexico, I was subject to the possibility of a luggage search at the Belizean customs building. Now at three AM as the only passenger on a luxury bus with 2, count them, 2 drivers (oh wait, couldn't count, one was sleeping in the luggage hold), the fact that I was frozen solid after travelling for 5 hours in that meat locker on wheels bus, I was given a pass. I think I have a name for a Benjamin Moore paint - Canadian Ice Cube Blue. Oh, that was my language when I got out of the bus on the way down and realized Mexico and Belize were in the middle of a cold spell.

On the way back to Mexico from Belize, I puddle jumped through 4 or 5 take offs, and caught a cab from Corozal in Belize to the bus station in Chetumal, Mexico. Thankfully, I needed only 1 taxi, no walking between borders. When I asked when I needed to take my luggage out for inspection at the Mexican border, he said I didn't have to. And he was right. No checking for baby birds or mysterious packages that wash up on the Belizean shores. I just toddled my way to the ADO meat locker distribution plant bus station to await my bus to Jose Maria Morales.

2. If Only I Had a Picture. Oh, if only. I could see my hotel in the distance, after such a long day of travel, I didn't feel like bumping there with my luggage. So I took the only transit I could find. A bici-taxi, no motor, pedalled by Grandpa. My suitcase barely fit, and me even less so, and there was Grandpa grunting and groaning away as he pedalled, mercifully slightly downhill, save for 35 speed bumps, to the hotel. Lo and behold, Shakira's successor was parked there, dislodging her passengers, and I was ecstatic to see Kathy and Ann, who were wondering who the wild screaming Banshee was. I guess they thought it should have been Grandpa in response to the heart attack he was having while taking me to the hotel.

3. A Word About Shakira. We had many laughs over Shakira. It was the name of our mini van transportation we had been using during previous missions in Mexico. You have to picture it - a group of Catholic missionaries travelling around in a mini van that had a huge scantily clad image of Shakira painted on it. With a side helping of Ricky Martin. We Catholics know how to party. Shakira unfortunately has not aged well and is now scrap. Like the human one will be, well, some day.

4. What Bugs Me. Roaches, actually. Especially at midnight. The roaches in Mexico seem to be half way between the size of the New York Specials and the Belizean behemoths. Which is to say, if you step on them, they crunch. And leave a mess. So there I was at midnight, trying to shoo said night visitor out of my room. Talking to him, cajoling him to just go. Now. He ended up hiding in the door jamb, so I did what anyone would do. I closed the door, waiting for the crunch that would make me feel more comfortable over night. When I opened the door in the morning, expecting roach guts, he was gone. I could only hope he hadn't scurried over to Kathy's next door.
I met his younger brother Jose the following night. Jose received the Royal Flush, and I had visions every night thereafter of him lurking just beyond the elbow in the toilet, waiting for me arse, to come up and bite me.

5. Speaking Of. Toilet seats. There weren't any. Except in Queen Ann's room, in the pent house suite. Mexicans must be well padded, or never have wonky knees. I was like Samson, holding out the walls, every time I used the facilities. Fortunately, the bathroom was small. I mean honestly, who can pee when their knees are firmly hooked to their chins????

6. Corn Flakes. Apparently not just for breakfast anymore. God bless our ground team, one night after a really long day, when lunch was not even supposed to be provided (but was, thankfully), we arrived back at the ranch to a hearty bowl of... corn flakes. I don't mind breakfast for dinner, but of all the cereals in the world, the bane of my existence and the one I hated the most, was up for dinner. Then of course, I had to remind myself  of my purpose of being in Mexico. Beer. Margaritas. Cabana boys. Mission work. A lot of folks don't even have sawdust corn flakes to call a meal. Offered that one to God. He knows I suffered.

7. My Name in Mexico. I have had some interesting takes on my name in Mexico over the years, seeing as the"y" is pronounced as a "j". So I have had Yudy, Yudi, Yuni, Yumi, and my personal favourite that earned me a name tag, Yuri. this time, however, my Amurcan interpretor told me that Judy is "Yolanda" in Spanish. And so I was introduced as Yolanda the whole mission. Except it isn't Judy in Spanish. I'm going to get a complex soon.

8. First Time For Everything. About 34 years and 40 pounds too late, I put on my first bikini. Luckily, I had already gone snorkeling in the Bathing Suit of Armour, so the fish were left intact for the other tourists to see. Went for a Mayan Mud Bath.

First, I had to struggle out of said bathing suit, for the mud, as the masseuse offered me the, uh, bikini. It looked like the paper shoe covers you wear in the O.R. Can't remember if it had treads on it. Maybe all the bikinis were rejects from the O.R. company. Anyway, we all know how hard it can be to extricate oneself from a wet bathing suit. Try doing that with one that is designed to suck in all your flab into an hour glass shape, one that is partially filled. Let's just say, it is a work out. until the masseuse just comes up and tears everything down. There now. And offers me the paper, strapless bikini. I am sure the Mayan gods in Chichen Iza heard me laugh. They banned any offerings of born again virgins that day.

Of course, the strapless bikini was made for little stick things, even the extra large. The guys get to wear the bottoms too. Not sure which is worse, those or Speedos. They give Speedos a run for their money. But there I was, all decked out in my strapless, no support, paper bikini, possibly with treads.

They rub the mud on, exfoliate, and dump buckets of water on you, all while on the table in said bikini. then they put some other stuff on you, let you marinate, then rinse you off, which entails sitting on a tree stump in front of what looks like a rain barrel, using a coconut shell to ladle the water over yourself. Then the masseuse has you stand up, because you are not doing a good enough job, I gather. She then proceeds to pull out the bikini top from the top, and then the bottom (my lord, what huge stretchy elastics they have!) and dump water over the girls, ensuring every nook and cranny gets rinsed. I might as well have been naked. And the same for the bottom. Leg elastics pulled, water thrown, all creases devoid of mud. Then the massage afterwards. I met my colleague after that, with a stupid smile on my face. Proceeded directly to the margarita bar. I don't think I will make it as a pin up girl.

9. Penny Wise. And pound foolish. What the hell was I thinking? I had spent a month in Mexico, spent a fair penny, actually, and then I nickeled and dimed myself out of a non stop flight home. Spent 4 excruciating hours on a layover in La Guardia, an airport I had previously decided I would never set foot in again. Okay, so now I REALLY will never set foot in it again. I mean it this time. Just like Miami. 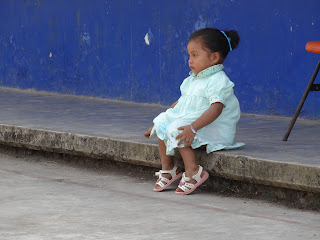 And that is my little world once again.

Posted by nursenurse at 9:51 PM