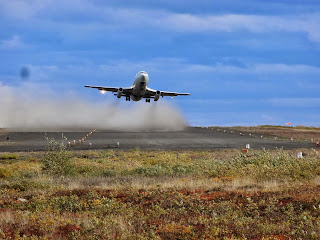 1. Only in Canada: My flight was late into Yellowknife. I tore into the terminal and ran screamingly to the gate room, where gates 1 and 2 reside. Lots of people, but no Canadian North attendants. Until I heard my name over the P.A. system. I had to report to gate 5. Where the hell was gate 5? Didn't know Yellowknife airport was big enough to support 2 gates, never mind 5.  And so once again, I channeled my inner O.J. and ran and leaped over to gate 5, where I had my own personal escort out to the plane.

2. Someone exposed the x-ray films, and we aren't telling you who.

3. That'll Learn Ya: Imagine my delight when one of the undisciplined little kids, cute as a button, decided to figure out the mouse trap. A sticker made the boo boo all better.

4. EEK!!!: The Quack of the Week does not like mice. Hence the traps. He is afraid. Very, very afraid. Bwahaha!.

4. WAKE UP!!! : Imagine my complete and disdainful surprise when I realized that I had turned on the timer on the Ridiculously Expensive Alarm Clock Known as the iPhone instead of the alarm, and that this realization came at 0205 in the AM whilst I was fast asleep. That sucker was ringing, vibrating and lighting up all over the place, and in another context, might have been wickedly fun. Just saying...


5. Someone may have exposed the x-ray films a second time in the same day, and we are still keeping it a secret.

6. Who in their infinite wisdom decided that room darkening blinds and windows that work are not a necessity in the Land of 24 Hour Sun?

7. I wonder why it was necessary for me to find out how much of a mess a can of exploding pop left in the freezer overnight makes?

8.  WAKE UP! part 2: I am in Belgium. The temperature is hovering around 30 degrees C and sweat is pouring off my brow. Ah, but a lovely Belgian brew awaits me, just a mere one minute walk away. Who dares to blast me from my reverie? What the...? I am in the Arctic? Who makes this stuff up? God? Can you have a little mercy down here on someone who wants a palm tree and a beer with the heat? Or just a tree, period? Doesn't matter what kind, anything over 6 feet tall would be appreciated. In full leaf.

9. On the first day of placement, at my front door, within an hour of landing, I was asked if I wanted to buy: a wall hanging; another wall hanging; a hat; ; sealskin mitts; the first wall hanging yet again; and a carving. The first wall hanging pretty much did the daily rounds. Assorted carvings came and went. More wall hangings. Jewellery. Eventually they tried to appeal to the foodie in me, with char and caribou. I bought the char. What I really wanted was someone with a beer and a palm tree. Guess I was expecting too much.

And that is how it went. Love to all.