News From the East 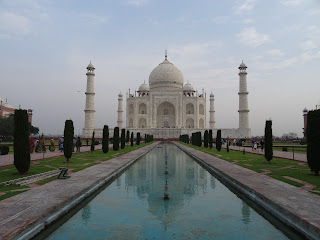 India. A land beyond description, I think one has to see it to truly understand it. Beautiful, kind and friendly people. Glorious food,  a terrain that you may not have known exists.

And then, there is my story.

Many years ago, I had told the Bean that if she ever graduated university with a piece of paper in her hands, we would go on a Mom/daughter trip somewhere. While she graduated several years ago, life, for both of us, jobs and children seemed to push this away. To the point where she did not recall me having told her about my offer. I thought it was now or never, when I made the offer, finally. With two kids and the prospect of a new house/full time job for her some where in the near future, the time had arrived. And so she picked India out of an eclectic choice of trips. Within a few months, she and her hubby had bought a new house, and she had a full time job. But the trip would go on.


1. When Is a Reservation Not a Reservation?  When you are a) Jerry Seinfeld, or b) Lufthansa. We had paid extra for seat preselection for the two flights down. Via the Lufthansa website. Which were not honoured. The excuse? Apparently, for the first leg, I had not used the airline site, which I had, and there may have been a change of equipment for the second leg. There was not. Would they refund my money? They would not. Well not 100% I got 1 out of four. That's $35 out of $140. Danke shön. Shoen. Whatever.
2. Kicked Out Of The Nest. Apparently my daughter is not family, when I asked why she and I were separated for the last flight home. They told me they saved seats together for families travelling together. Spouses aren't family either as evidenced by the little old lady who asked me to switch seats so she could sit with her little old man. So I did. I was happy I did, because there was an obstreperous brat spirited child  back there, the same screaming mimi  exuberant waif who exercised her right to freedom of expression from Delhi to Zurich (and weren't we, or maybe just me, prematurely glad to get off that 7 hour flight to get on the quieter last leg home without HER)  and was allowed decided to yell kick scream command the aisles exercised it yet again for the seven plus hour flight from Zurich to Toronto. My daughter, bless her heart, thinks the unruly effervescent toddler may have had developmental problems. I think it may have been the parents. Of course, MY child was perfect on that flight.

3. How Many Lanes Does a Six Lane Road have? The answer in India is twelve. Three taxis, four tuktuks, three cars of varying sizes, and 2 trucks.  This does not take into account the three scooters, two motorcycles and five bicycles that run between them, nor does it include the six cows standing, lying or stopping wherever they please. Wait, is that a water buffalo loping beside us...?

4. Squatters' Rights. There are two types of toilets in India. Squatters and sitters. Most of the locals use the squatters. Us tourists mostly use the sitters, known as "Western Toilets." Our trusty guide Sanjeev made a herculean effort to stop the bus at places that had sitters. But upon occasion, we required a stop beyond his parameters, and so hasty choices had to be made.

No one ever wanted to be the first person to call for the bathroom break. We would be sitting nervously cross legged, until someone, well, me, would finally get up and ask for a stop. I was never the only one to leave the bus. But always the first to ask. If we were lucky, we would be pulling up to the pre-arranged bathroom stop, and so would have the choice of squatters or sitters. Some of the younger folks did not mind the squatters. Some of us older folks did.

One day, there were no squatters or sitters. There were remnants of an abandoned building with walls that were high enough and situated so that you had your own "cubicle".  Now there are two types of squats, assisted and freestyle. Younger folks were adept at the latter. Some folks, like me, were not. The assist consisted of grabbing onto crumbling walls, trees that were sprouting through the gravel, spider webs - anything to support your squat while protecting wonky knees and keeping your clothes dry. Or stripping off and hanging your drawers on your wall.

Another time took us to a junior school. With proper squatters built into the floor, for little people, angled into the corner. Now here's the thing. It has to do with the aim. Men have no problem, for a quick whiz anyway. They can aim, they can score two points, single or doubled handed. Girls have to squat, preferably with a wide stance. Because our lady bits are protected by other bits, and the stance corrects that, well sort of. In the junior bathroom, to adopt a wide stance meant that you were aiming at the floor, and not at the hole of the squatter. Younger folks could assume pretty much any pretzel like position and hit the target. Some of us older folks, not so much, because the protective bits cause the aim to be way off, and you have braced yourself against anything within reach to keep you from landing flat on your arse, or your face, depending on how you have contorted you body for the squat. Thereby missing the target completely. With any fore thought, you have removed any clothing that may be in the line of fire. And then there is the matter of standing back up again even though your knees are locked, and you are trying to madly avoid the flow back because you are wearing flip flops. While I have proven myself in northern climes in minus 50C weather, India left me befuddled, bare arsed, and ever so thankful that I can "sit" at home.

5. Cringe Worthy: Two Moms who broke out into song at the drop of a hat And the daughters who cringed. Nice to see that us old girls still got it.

6. Cringe Worthy 2: Canada's Got Talent. I am sure I have the winning performance for that show! I have a largely unknown talent. Howie, Howard, Heidi, and Mel B.!!! They would all be so in awe of me! Because I can imitate with deadly accuracy, the call. Of. A . Male.  Drum roll, please....PEACOCK! Which is the national bird of India and was plentiful in all of the parks we visited.  My talent became well known in India. Okay, so only to my little group, as I was repeatedly called upon by none other than Sanjeev, to demonstrate my formidable talent. Peacocks answered me back, and one started to fan his tail, when he saw me. Wait, Howie!! Don't buzz me! I haven't even started the call... Howard, oh c'mon Howard, not you too, oh for shame. I know Heidi...Heidi...HEIDI!!! Mel B., it's just you and me, now, just hear me out while I take a deep breath in...Mel? Please..? TAKE YOUR HAND AWAY FROM THE BUZZER!!!!!..... Have any of you been speaking to my daughter.....?

And that was my little world in India. Mom and daughter had the most awesome of times. In spite of a couple of cringes.