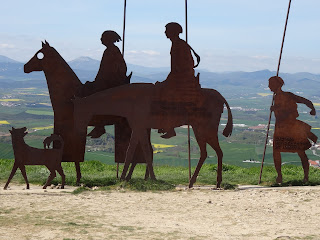 As many of you are aware, I completed the number one big ticket item on my ever evolving Bucket List. The Camino de Santiago. Without further adieu, here are a few observations....

1. Strike One: Just arrived in Paris. Already hampered by a strike. All these boarding gates. Free. No planes. And we had to unload onto the tarmac and walk in to a non helpful terminal. Now my flight landed early, which prompted a "Why did the travel company not book me on the train to Bayonne that leaves from the airport instead of requiring me to taxi to another train station a whole bunch of Euros away?" And the answer is...because they only have two, count them, two guys processing you through customs and immigration. My plane load, and a bunch of others. I would have missed that 1030 train. My plane landed at 0730.

2. Strike Two: Looking for my train number on the board in Bayonne, to catch my second train to St. Jean Pied de Port. Only my train number did not appear. That's because there was no train. Due to a strike, THE strike. Still not clear on who was actually striking here. So we were herded rounded up corralled placed on a bus that could not take everyone and driven to SJPP. Stopping at every train station between. Not that we could take anyone on, and we were all pilgrims. No one getting off.

3. Strike Three: Well lookie here. On the board. My train from Santiago to Madrid is only going to Zamora. Because of a strike. Then a bus. Adding a couple of hours to my travel time, because buses cannot travel at 250km/hr. Yippee.

4. Ball: Not being kicked off thrown off the train in Zamora. Because someone in their infinite wisdom decided that a train with maybe 20 cars of folks going to Madrid had too many people to fit on a single bus.

5. Not a Home Run: I eat out on my own fairly often. Most of the time I am treated like a regular human being. As opposed to a female lone diner. I am happy, I tip well, I am generally really pleasant and easy to please. That all changed in France. I was still happy, easy to please, but as a single female diner, I got the worst seats in the house, even though there were few patrons at the time I was eating.  I even got to sit behind the potted plant. There were two other occupied tables in that resto. I felt like Arte Johnson on "Laugh In", cue the comment "Very interesting!",  several times as I watched the other tables being waited on and served promptly while I had to rattle palm leaves to even be noticed by the guy who had seated me behind the tree in the first place.

6. Movies Lie: I had not watched "The Way" until a week before I left home. I had done my research already, and knew that I was not in for a cake walk. I met so many pilgrims who were inspired to walk the Camino by that movie. It does not show you how difficult the Way can truly be, as in it feels uphill the whole way. The slogs downhill worse than going up. The huge blisters that mushroomed on many a pilgrim's feet after just a few days.  Shin splints, sore knees, achille's tendonitis. The race for albergue beds early in the AM (which I did not participate in. ).  The lack of beds at the next village. Relentless walks through industrial areas to arrive at the historical hearts of the big cities of León and Burgos. Hours of walking without seeing a soul, or a marker, then wondering if you are still on the right path. Then again, it does not show the wonder of turning the next corner, and realizing that you have suddenly arrived at your next destination. The awe of seeing abuelo and abuelita plowing the fields with a horse. Waiting for the herd of cattle to walk the path ahead of you before you can continue on your way. the magic of bells, on sheep and on cows. The grandeur of the mountains around you, and the calm serenity of the meseta, which can be likened to walking through
Saskatchewan. If you stop to listen for a moment, you are serenaded by many birds hidden in the wheat fields, and it is glorious. No movie, and no photograph can adequately express what is to be witnessed along the way, difficult or not.

7. Sam I Am: Yosemite Sam. I had many magical Yosemite Sam moments. Like my first major descent into Roncesvalles, toes jamming against the hikers, knees singing a weary song. And this was day two. Rattin, frattin'....

8. Two Roads Diverged: Many times, the Camino splits into the Complementario, and the "official" Way, marked by the number of kilometres until Santiago, if no one had stolen that part of the marker. I soon learned that "scenic" and "Complementario" generally meant longer, or more up, or something that I did not want to do. When you are averaging over 20km in a day, scenic does not mean anything good. So when I got close to Portomarino, the Way split, Complementario pointing towards the road and up, while the official path was off the road and sloped towards the river that needed to be crossed to get to Portomarino. Feeling rather accomplished, I took the official route, not wanting to go up and then down again. Pleasant little walk, really, until I reached the final steep descent, through a wall of rocks. No well paved path. Having made a pact with myself at the beginning of the Camino, I would not back track, and again channelling my inner Sam and every swear word known to man kind, I tossed my back pack down a few feet, and slid precariously on my rear. Another toss, another F-sharp, and then I heard laughter
from the top. A lovely young couple, who then offered to carry my pack to the bottom for me. Which they did, and left a note on my back pack asking folks to leave it there as the owner would be down shortly. If they listened closely, they could have heard me coming, rattin' frattin' tarnation....

9. God's Little Joke: Was when I crossed that river to Portomarino, only to be greeted by a series of steep stairways to reach the inner town. Rattin' frattin' tattin'.....

10. Strikes, Spares and Misses: Ordered a waterproof breathable rain poncho a month before I left, from Amazon. Did not arrive by the Friday before my departure Monday afternoon. So I bought one from MEC at three times the price of my Amazon find. Only to receive the original order in my mailbox an hour before I left for the airport.

11. He Lives: Joost from "The Way" was personified on this journey by a young man named Christian, from Denmark. A bit of a source of frustration for his walking companions, he slowed to talk and walk with all he met. A true character, one who truly loved people.

12. The Letdown: The one thing from the movie that I wanted so badly to be true was the entrance into the church of St. James. I descended the stairs to the right of the church, listening to the mystical notes of the gaita, a nod to the Celtic roots of Galicia. I rounded to the front of the church, only to see scaffolding. And a blocked entry into the church from the front. As well, you cannot take your back pack into the church, which the movie wrongly portrayed. As I had not been to my hotel yet, in fact, I had no idea
where it was, I advanced to the Pilgrim's Office, to receive my certificate and Compostela. I had a wee discussion with the clerk who was going to deny my distance certificate, because one hotel had not stamped my credential. In the end she issued both certificates, and I was free to go. Found my hotel, then went back to the church and entered through the back. I didn't feel it, the accomplishment, the spirituality, the peace. I felt nothing, and was willing myself to feel something. I left and met up with another pilgrim I had met at the beginning of my journey, a very special gentleman and an Anglican priest. We shared wine, dinner, and stories, as we had separated in Pamplona. His Way had been different than mine. I still wanted to go to the Pilgrim's Mass the following day, but was resolved that the feelings of emptiness would remain.

13. The Uplift: How wrong I was, and gratefully so. The next day, I wandered back into the church, amidst the pilgrims, and found a seat for Mass. In a few minutes, my Anglican priest was beside me. he had already been to a Pilgrim's Mass having arrived to Santiago a day before me. Then came the pull, there were confessionals set up in many languages, and lo and behold there was one who spoke English. And so I went and unloaded what was left in my soul, made the young priest laugh, received my penance, and then all was right with the world. The church was brighter, there was joy in my heart that only increased as the Mass went underway, punctuated by the voice of an angel, a nun who was singing so sweetly. A Guatemalan bishop was in attendance, and as luck would have it, the botafumeiro was hoisted and swung at the end of the Mass. And the true spirit, meaning and beauty of what I had just done, this pilgrimage, enveloped me. I had found my Way. 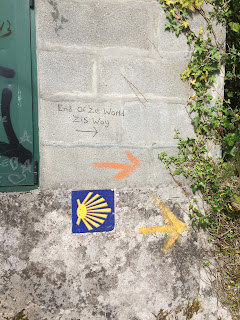 Posted by nursenurse at 8:44 PM