A Few Tales From the North

The Boys in Blue brought someone to the clinic the other night, just to be checked over. They needed  my name and date of birth for their report. I told them 1982. For some reason, I didn't get away with it.
We have a lovely machine here in the clinic pharmacy that prints labels for our prescriptions. I was giving a lady some Flagyl, and typed the directions as follows: "Take 2 tablets BID until finished. Do not drink alc." I had used up all the character space, so alcohol would not show up in its entirety on the screen. What printed out was this: "Take 2 tablets twice daily until finished. Do not drink in the left ear." Yeah, I know. I didn't get it either. I thought I saw Godzilla somewhere outside the window, made me wonder where I was for a minute. Cancelled that label.
There are really just two seasons up here: winter, and, mud and dust. Winter is pretty much over. It still freezes at night. Then the sun comes out and melts all the water in the pot holes and beyond, giving way to some pretty serious glue for your boots. I bought wellies up here, leopard printed ones, but just one good dry day, and all that water will dry up. The roads aren't paved in any of these communities, so what you have now is dust. And there is a Murphy's Law that says, no matter which side of the road you are walking on, or which direction the wind is blowing, the dust kicked up by the ATVs, the SUVs, pick ups and latent snow mobiles, will always be directed at you. The wind is funky like that up here. The dust is the sunflower of the pedestrian world, always following and settling on those who deem to put one foot in front of the other in a town where vehicles rule, even though you can circumnavigate it in 20 minutes or so. Then it rains, and it is mud all over again. Or it freezes, and winter is temporarily back.
When I was in school, we were overjoyed when it was announced we would get a March break. I don't remember getting 2 weeks at Christmas, but then I also thought I was born in 1982. And of course, summer vacation. Up here, things are a little different. In addition to the March break and the two weeks at Christmas, there is Goose Break. Which is now. Folks go hunting in the bush for two weeks. In other communities, there is  also the week long Moose Break, in the fall portion of the mud and dust season. I would imagine this community has that too, although moose aren't in great abundance here. That's because the moose knows what happens to the goose, so he just doesn't show up for the party.
So now I have been a week without the internet. I have bug eyes, my hair is greyer. Much like everyone else in this town. The air is blue with collective F-sharps cried out in abundance daily. Why is it in the poorest countries of the world that I have visited as long as I have electricity, I have the internet? And in developed CANADA, I have gone as much as a month before connections could be fixed? 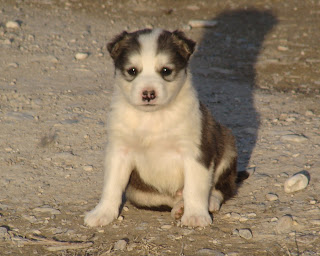 And of course, there is nothing like a puppy to make it all better.
Posted by nursenurse at 6:38 PM