And Now, Some News From the South 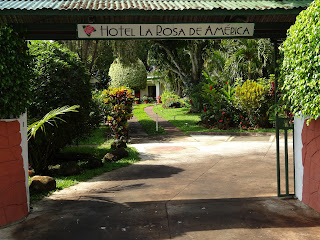 1. Do you know the way to San Jose? Thank goodness for drivers with signs. Didn't have to worry about orange taxis or red taxis, I could never keep them straight. But I had to tip the little Tico guy who thought it would be fruitful if he yelled out the name of the hotel for me to find my ride. He didn't know that I had a set of lungs. He did know that I had a wad of cash. At almost double his size, I was more than perfectly capable of wheeling my own carry on. And crushing him into oblivion. But then I thought, he could end up being a beggar. He was happy, enthusiastic, and was trying to do something to earn his keep. I gave him a tip when he yelled out the hotel name. He seemed genuinely pleased, and knew well that no more cash was coming. But he wheeled the luggage regardless. 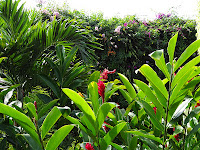 2. After a night at the beautiful La Rosa de America, we flew to Puerto Jimenez in the Osa Peninsula. It only took two tries. Lovely little Cessna revved up and started speeding down the runway. Then the pilot hit the brakes, thankfully before the end of the runway and the near by mountains. Apparently not enough power. So feeling like lemmings, we were herded off until another airplane could be inspected and readied, and fortunately, there just happened to be one there. We were off in almost no time.
3.Love is in the air. And the swimming pool. El Remanso does not use chemicals in the pool. The water comes form local surroundings and is tested until perfect. Unfortunately, most conventional and unconventional tests aren't looking for frog semen. Which a few randy couples were enthusiastically providing nightly. Under the guise of playng "Leap Frog." Or more precisely, "Jump Frog."
4. A fer de lance a day keeps Tommy away. So sayeth Florida Tom. We had already seen a couple of these venomous snakes at El Remanso while accompanied by our guide, Gerardo. Taking a camera safari while I was trying not to kill my horse (why do they always give me the little horses?), Florida Tom spotted a fer de lance in his pathway on the return back to the meeting spot. The snake wouldn't budge.Not wanting to test the reflexes of the critter, or be the answer to the question "How poisonous is it?" Fla. Tom returned via the river bank, found the vehicle gone, and started walking back to the resort, figuring that the Land Rover had gone back and would return for us later, and would pick him up along the way. Eventually, a local took pity on him and dropped him off at the resort. The unfortunate thing was, our driver and vehicle had gone in the opposite direction as one of the resort workers was practicing her driving skills. When I finished my ride, they were waiting for me without Tom, so we became quite concerned. After 2 searches on the trails, we were approached by the pony express of the area - Rinaldo on a dirt bike - and told that Florida Tom was back at the resort. It was a double rum that calmed my heart down after that. Okay, I don't really need an excuse for a double rum, with a twist of lime. It was just the right thing to do.
5. Miami Airport. Again. Can I learn to hate you even more? You bet!
The Immigration line was okay, the nice man let me be American and even pointed out where the shortest line was, around the corner. I thought Florida Tom was right behind me, which he was at first. It was so hard to tell which line was shortest, so we separated. I ended up in the short line, he was in a line that was initially just a couple of lemmings longer than mine, but due to foreign lemming eye scans and paw prints, he pretty much stayed in one place while I was herded on, even ordered to jump in front of the wheelchair lemming by the Immigration Hawk, once I was deemed an acceptable lemming, and I followed the rest of the lemmings down to the baggage hall. Not to pick up luggage, as I had only carry on, but to hand my blue card to one of two more Immigration Hawks at the front of the very long lemming line ups. Then I had to follow the yellow dots, to where I didn't need to go. A friendly American Airlines rep directed me around the corner and up to level 2. I went to the first checkpoint, but that was reserved for baby lemmings and their handlers. I was sent to the next check point. Wrong section - it is divided into two sections - first class lemmings, and econo lemmings, so off to econo lemmings I skittered. Looking at the line ups for both, I saw no difference. The extra cost for first class apparently means nothing on a busy night. And why the long back up? Because every freaking lemming was being funneled through the total lemming scanner. You have to stand just so, lots of furry bellies jutting out. And if you don't stand just so, Security will make you stand just so. As opposed to just walking through the thing that dings. There is a first class lemming scanner, and an econo lemming scanner. Both are equally inefficient. In the long lines surrounding me, I guess I was a blessed lemming. I got to my boarding gate fifteen minutes before the posted boarding time. A lot of lemmings wanted to find a cliff, having missed their flights. When Security felt sorry for the bleating lemmings, if lemmings bleat, they would open up a walk through scanner for only 3 or 4 of the bleating lemmings. Then, even though there were about 150 lemmings still in each of the first class lemming and econo lemming line ups looking for a cliff, Security would re-funnel them through the total lemming scanners. I never saw Tom after the initial Immigration line up, I found out the next day that he hadn't jumped off the cliff. He only had to drive home from Miami, since, as Florida Tom, he lives in Florida. 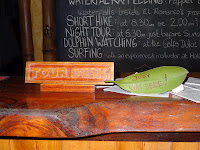 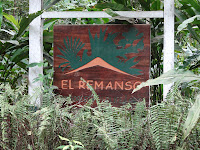 Salud!
Posted by nursenurse at 7:59 PM