1. I'm Just Wild About Harry: That's our Jack of all trades at Cambridge Bay. Said to me one morning after what I thought was a successful struggle with my hair gel : "What happened to your hair?" Gee, thanks? 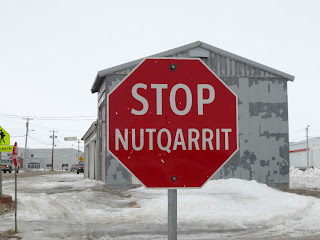 2. Where's Waldo? Okay, where's my computer? There is an advantage to owning essentially three computers even though I am by myself. Because when stupidity sets in and you leave your computer in the overhead bin of a stupid small plane chartered by stupid Canadian North because their stupid big 737 wasn't working, then you have something to fall back on.
3. Non Service With a Smile: I remembered my computer while waiting in the security line up in Yellowknife. Went to the airline counter. No one from Canadian North would go across to the Arctic West hangar to retrieve it, neither would the Arctic folks deliver it. Oddly, they never contacted Canadian North about it, you know, when they had two hours to deliver it across the parking lot to Canadian North. I was told to pick it up at the airport the next time I was in town, which fortunately will be July 2nd. But what if I never returned? Then what? I was left wishing my Guatemalan guide and finder of lost articles had been with me. He'd have gotten it back for me. 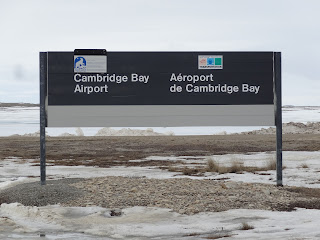 4. Celebrating Granny's Death: Results in a broken beer bottle to the chin and a stitching job from me. Granny would be proud.
5. I'm Telling Dad on You: Said by same patient when he realized (because I told him) that his brother was taking pictures of the whole process with his smart phone. The stitchee was 37 years old. 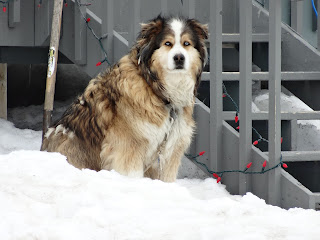 6. Man's Best Friend? Rabies up there in the Arctic, who would have thought? Gave out more immunizations due to possible rabies exposure than for regular child hood diseases. Didn't touch one doggie myself. It's in the fox population up there.
7. Underneath All That Ice: Is rock and stones. Lichen and some short little plants, but otherwise it's a kind of hilly moon scape. What plant life there is will bloom sometime in July. Otherwise, no trees, no bushes, George W. or otherwise.
8. Land of The Midnight Sun: So what Einstein didn't use black out blinds in the original design? I re-did the windows, design by Reynolds. Wrap. As in tin foil. Maybe they built the place when the 24 darkness was still hanging about.
9, Search and Rescue: Golfing term up here. Because you can't see the ball among the rocks and stones. But hey, it's free!
10. The Happy Hooker: Okay, not really. "Are you married?" "Uh, no." " Do you wanna go to the Elks and hook up with someone?" "Uh, no."  The nurse that runs the STI program overheard the conversation and graciously offered to go with me since she knows who has what disease. Uh, no.
11. Non Service With a Smile Part 2: The flight out of Cambridge Bay was delayed by almost 2 hours, and instead of the 737 they sent the aforementioned Dash 8, aka the stupid small plane. So those folks with connections in Edmonton missed them. And had to fork out for their own hotels there. Why? Because they weren't booked with Canadian North the rest of the way. Hellooo! Canadian North doesn't go anywhere else through the provinces. And with a ticket cost that could fly me around the world, you would think they would offer some compensation because their equipment basically sucks. Several times weekly, apparently, which saw me stuck in another community when the incoming nurses were stranded in Yellowknife because of faulty planes.
12. My Little Cabin in The Woods: Up in the Arctic, they don't go into the bush. They go to the rock. The residents all have little cabins or shacks out of town, to get away from it all. Except they already live in the rocks in the middle of no where. Go figure.
13. Do You Know Where Your Children Are? I bet a lot of folks up there don't When I was returning to the residence at 3 AM in broad daylight, I noticed groups of young teenagers and kids plying the streets. Put some foil on the bedroom windows and put them to bed, I say.
14. $13.99: The price of a small jar of peanut butter.
15. $295: The price of handmade sealskin gloves. I'm still thinking. They have to be kept in the freezer, otherwise they shed.
16. $330,000: The asking price for a 3 bedroom condo in Cambridge Bay. We are not talking the Marilyn Monroe buildings we have in Mississauga. Contrary to what one would expect in an isolated part of the world, housing is very expensive.
17. Shopping While Working: As the new kid in town, everday, someone would pass by my office and try to sell me stuff, from zipper pulls fashioned like miniature boots, all beaded and made of seal, to miniature Inukshuks. The Inukshuk won, it now accompanies my Taino moon goddess outside my apartment.
18. On Golden Pond: I asked about where they dump the sewage after it is sucked out of the septic tanks. In a big pit near the dump. Untreated. Ick.
I am back home now, although for me, it's as the song goes, wherever I lay my hat. Except I hate wearing one. I guess it's wherever I park my butt. One week from now, I will hopefully pick up my computer in Yellowknife on the journey to Kugluktuk. I hope the lichens and ground covers are blooming, or whatever lichens and ground covers do. And I am still on the search for a wild musk ox.
Salud! 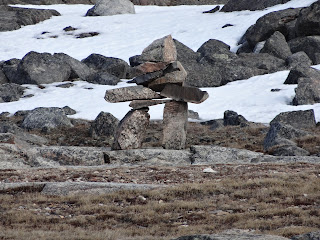 Posted by nursenurse at 9:46 PM