News From The South

It's been awhile. Too much to do between trips. So here I sit in lovely Panama. For those of you who don't know, my last visit here was a little over four years ago, along with the Ex Boy. It was here that I determined the Old Boy was going to be the Ex Boy. What did it? Not what I expected. I liken it to when I zip lined in Peru a few years ago. The guide encouraged me closer and closer to the edge, so that he literally just touched me on my back, and I was flying through air catching flies. Well, with the Ex Boy, I wasn't catching flies.
So this visit brings a bit of the bittersweet with it. Thanks to some wise advice from a guide, I know to always go face up, feet first, and hang on to my paddle. Oddly , I returned home with a little more self confidence, a lot more guts, and a certain joie de vivre that had been absent from my life for so many years. That hopefully will continue on forever.
No airline story to report from this venture, unlike the last three trips flying home in Canada with perfectly good weather. American Airlines, in receivership, delivered me and all of my bags on time. I was given the chance to upgrade on the 1st half of the flight for $125, which I did. They would give me three free bags. Now that is a lark. Okay, so I have at least an observation. American gives us plebes in economy 1 free bag, but they charge double the price for the second, conmpared to everyone else. Three bags in business class? Really? The only 3 bags you'll ever see are in economy, and they happen to be grannies or mother in laws. And in fact, there are plenty more of them back there. Business men may have a carry on and/or a garment bag, and a computer. What, do you think they are moving to Miami or Cleveland? Shake your head, American, allow them one non existent checked bag like everyone else, and give the rest of us bags a break on ours.
Today I climbed Cerro Ancon. Panamanian taxi drivers are adorable. Everyone honks and wants to  pick you up and take you to the top. MINDS OUT OF THE GUTTER!!! This is not "Fifty Shades of Panama". They all had fares. But I huffed and puffed my way to the top and was blessed with some gorgeous views of the city below, a city I love. Can't explain it, I am not a big city girl, but PTY rocks. Met one of the adorable cabbies at the top, he was waiting for his charges to complete their photo ops, so he took me to where I could take some good shots, chit chatted and smiled, and, adios. 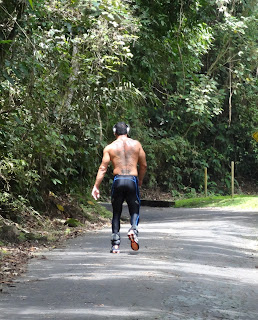 I picked my way back down and met this guy. Look to the right somewhere. I didn't take a front shot, because I didn't want to be too obvious. Let's just say from the waist up, front on, well, I didn't know whether my shirt was wet from sweat or from drool. To state the obvious, in my opinion, though, no man should ever wear speedos or whatever the heck he is running in. He was going up a hill, no race. Need to get over oneself, hmm? Of course, I think it was his exceedingly fit girlfriend whom I passed just before. I guess he's keeping up with the Joan's ass. Oh please. It is hot, and I've not had enough rum. 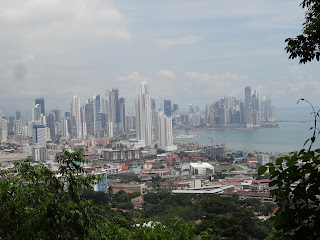 I never mind being alone, but occasionally it does feel awkward. Tonight I went to a recommended resto, of course I arrived a little earlier than the the locals, and I was the only one there. No people watching, but waiters tripping over themselves to serve me. I had my pick of tables. I received a couple of looks like I had two heads. I guess these young ones don't understand why a fifty something year old somewhat menopausal and and literally hot mama customer would want to position herself underneath one of the two big honking air conditioners in the back. They also thought it was weird that I would send back a cerveza (Me! Send it back!) when it came out of the bottle full of ice crystals. Had a fun time explaining that I wanted it frio, pero sin hielo. I didn't bother trying to tell him what freezing does to the carbonation. Out of my Spanish realm.
Tomorrow I leave for Bocas del Toro, and have to somehow beg and plead with the regional carrier that they HAVE to take my 55 lbs worth of stuff, even though they only allow 35. The joys of traveling and mission work. 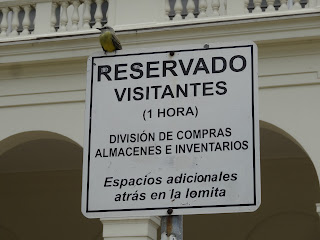 Salud!
Posted by nursenurse at 8:51 PM