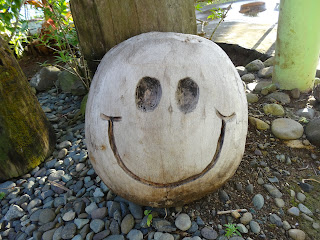 Every less than stellar experience always has a silver lining. Because of this journey, I:
1. Strengthened my quads and my biceps. Getting on and off a big sailboat is no easy feat for this Grandma. Depending on the tide, the boat would be much higher than the steps on the dock beside it. This would necessitate heaving the backpack and other assorted odds and ends onto the deck, then the usual wonderment of how the hell I was going to get on, usually followed by an amazed I never knew my knee could touch my chin. Followed by a plea for help, as in,  how do I get out of this position? Since I was usually the first one back to the boat, there were usually enough f-sharps and grunts and groans that would put the stockyards to shame. But I never fell in the water. Some days the boat would adjust itself away from the dock, making getting on or off impossible. Generally, there would be a nimble tall young skinny volunteer just waiting to help me. In that case, they would get off the boat in mountain goat-like like fashion by jumping onto the dock, or sometimes in their best Flying Wallenda fashion, by walking the rope that secured the boat to the dock at the back. Yeah, I could just see myself doing that. Not. then they would haul on the rope and move that sucker ever so slowly closer to the dock, so that Grandma here could make a bathroom run. Even in the pouring rain. While the mission might have been a bust for me, I must say that the young volunteers looked after me well. But so it came to pass that I had to get off the boat in the middle of the night, and also had to get on by myself because there was no one to whine at. And so to get off, I crouched down on the crunchy knees and hauled on that rope to get her closer to the dock. However, I learned, I had to be absolutely ready to fly off, because if I wasn't, the boat would float back out of reach for these legs in a few seconds. So pull and jump. It took me a few tries. Getting back on was easier, unless I had to fold me knee to my chin. But hey, I did it.
Then of course, there was going up and down to the bedrooms, which were kind of like miniature coffins. The stairs are made for graceful gazelles, complete with the lovely long legs and spring in their steps. Not for lumbering hippos who just seem to crash through everything. Each step was about 2 feet tall, okay, so I am exaggerating, but they were steep. As the boat was in the state of (constant) refurbishment, there were no rails or grips, so I would just pop out on deck like a jack in the box, using my arms to support the rest of me on the deck floor to haul me arse up the stairs. And yes it did get easier with time.
2. Learned to play Mexican Train Dominoes. While sitting in my usual spot at the marina, cerveza in hand, one of the local boat women asked me to join them in the usual Sunday round of Mexican Train Dominoes. I politely declined, having learned to play whatever style of dominoes I knew at the hands of some Brazilians and Panamanians. With them, you are the hero if you make the right move, but woe to you if you make the wrong move. Brought out the fiery temper in my various playing partners. I was then told I was going to play. I said maybe I would watch. "No, you are playing." And so I did, and had a great time No slapping of tiles. No yelling in Spanish or Portuguese. And I am hooked.
3. Saw the kindness and honesty, however it was purloined, of strangers. See previous post where I got my backpack back.
4. Milked a goat. When I bailed, I headed to Costa Rica. I was flying home through there anyway, just rearranged the dates so I could spend a few nights. One of my impromptu excursions took me to the farm of the owner of the tour company whose driver I employed. He asked me if I wanted to milk a goat. Now there's a thing you do on vacation. Everyone wants to zip line in Costa Rica. but milking a goat, well that is an original, and certainly a first for me. And since I am afraid of heights, milking a goat just seemed to be the right thing to do. And I was highly amused, especially when the goat jumped off the milking ramp and weaved in and out of the barn and fences, dog in hot pursuit, owner in hot pursuit of the dog. The goat was corralled, the dog banished, and I went on to milk the goat without any complaint from the goat. I'm still smiling. I could swear the goat was smiling too. 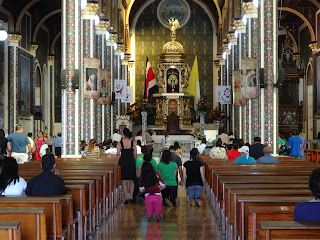 5. Witnessed faith, yet again. People expressing their faith and hope in the Basilica in Cartago, walking down the main aisle on their knees. Scores. I look back at our secular world, the more we have, the more we curse God for what we don't have. And here was this beautiful, humble expression of faith, on a Sunday afternoon with no particular importance attached to it. And I was humbled again.
6. Learned I can now run. I had planned the flight home well, three hours in between flights at Miami, I could get my bags, throw them under the line, go through security, and have a nice leisurely dinner at a nice restaurant. Oh come on now, only in my dreams. My flight was 1 hour late leaving Costa Rica. Then the boarding gate malfunctioned in Miami, so we had to be reassigned, and then taxied to, a new gate. Bueno. That took almost another hour. While we were told we were waiting for the reassignment, the noise emanating from below the plane indicated that the removal of luggage was well under way. That was what we were waiting for. It was the gate that was the farthest away from Passport Control. Multiple signs pointing up into the clouds for the SkyTrain. I think I proved to myself that I am capable of running a 5K, because instead of the train, that is what I did, and beat them - the dumb train - to Passport Control. I entered on the American side of things just as the train began spitting out its contents at the visitors' side. I became an honorary American once again, to the amusement of the Immigration Guy. Passed down to get my luggage, which was already on the floor, threw it to some guy who high fived me at my show of heaving strength, sprinted over to security at Terminal E, where I was told the line up would be shorter, then flew through the terminals with a quick pit stop to pick up a sandwich and key lime pie for the plane. My flight was already boarding, early, I might add, when I arrived there a little breathless. And that is how it all went. Salud!