1. Thoughts on Cruising.
a) Why is it  on every cruise I practically toss my cookies when a see a BIG suntanned, wrinkled old dude parading around in the brightest orange Speedo that ever defined a set of testicles? Very few Willies look good dressed up like a Sunkist navel orange. Shrinkage? Not due to the cold, it's due to sheer embarrassment. And, uh, I really do not need to know, much less see, that you are circumcised. Poor Willie has no where to hide.
b) The comb over pony tail. Yeah, there's an award winning do if I ever saw one. Most resplendent when the hair is greasy yet fly away, not well secured, and grey. Everywhere we went, I caught sight of this powerful fashion statement, and can tell you that three of the World's Best Margaritas at Jimmy Buffet's Margaritaville in Grand Cayman did not enhance the experience. The saving grace is that he was not the one in the Speedo. Now there's a picture forever burned to memory.
c) Dishonest cabbies really get to me, and I have been hit with my share. I was good in Ft. Lauderdale, the trip to the pier was $19 plus tip. Eunice, who arrived a little later, was charged $25 plus tip. Her guy made a detour. Karma will be a bitch someday.
d) It pays to be nice and chatty. I arrived at the pier well over an hour before boarding was to begin. I didn't care, I was so excited. And then I met up with Lu. Lu is one of Holland America's Ambassadors, helping to make the ship boarding process go smoothly. I was going to be boarded in Group 4. We chatted and laughed, and chatted some more. The twenty some odd year old supervisor came by, she said if Lu was happy, she was happy, and by the way, would I like to go down to the VIP lounge? It meant I would be one of the first to board. Of course, said I, and that was how I became a VIP for an hour. 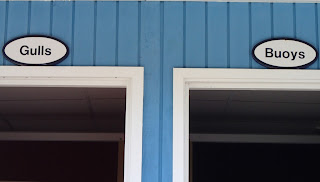 e) My lord, what a homely child. Sat at the table behind us. No one else but the other nurse at our table and I noticed it. He was the happiest little sot. Still homely, though. Good thing parents and Grandparents are exceedingly blind. 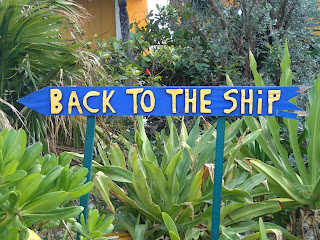 f) This one I knew.Hand shaken margaritas do not necessarily mean fresh. It means they've shaken the bar mix with the liquor and ice, in a shaker, by hand. With as opposed to what, I don't know. Still tastes fake. Whatever happened to squeezing the limes, muddling ingredients that need to be muddled? Then hand shaking, as opposed to shaking with your feet, your hips, or your dog.

2. The North.
a) Do not whine because you have to wear a sweater. I have been in temps of -35C or more, with windchills of -50C or more. Your nose hairs becomes so frozen and brittle they snap, and if Grandma sports a moustache, well, you will certainly find out when the frost hits the upper lip adornment. Never knew I had sideburns, either.
b) Well, you know, just read the label. My Roomie had a call from a patient asking how many times a day to take his medication. She asked him what it said on the bottle. "Take one pill twice a day." There ya go!
c) You have never flown until you have made an ambulance road run from here to Thompson. I think I spent more time airborne inside the back of the ambulance than I ever have on the Flying Tubes of Death. A wicked ride indeed!
d) "Hello, Judy?"
"Yes."
"You the one with the hair?"

e) "It was that older nurse that was looking after me."

Gee. Thanks. I guess.
f) You think you have it hard? What about the elder, who used to work the trap lines to make money? He'd be out for a month, with dogs and sled, working the lines. No tent, just sleeping under heavy blankets in the -40C weather. See a).
g) 0515 and 0640 flights all suck, unless you are going on vacation.
h) Shopping up north can help kill the blahs. As long as it isn't the Ridiculously Expensive Store.

And that is my world for now.
Salud!
Posted by nursenurse at 7:45 PM